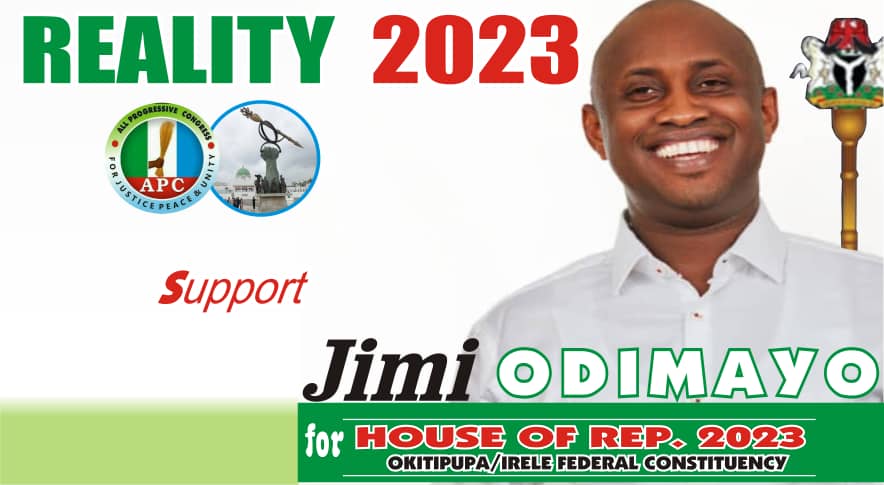 Ekiti state Deputy Governorship candidate of the All Progressives Congress (APC) in the June 18 governorship election, Chief (Mrs) Monisade Afuye, has disclosed the intention of the Incoming led  government of Biodun Abayomi Oyebanji to reduce youth unemployment and strengthen the value of Ekiti youths through various programs if elected.

Afuye who made the disclosure at Ikere Ekiti, her home town pointed out that more that BAO would also “ensure existing vocational centres have the capacity and support required to fill the identified skill gaps within the ecosystem “.

She disclosed further that BAO’s government will reduce unemployment and empower Ekiti youth through digital training for 5,000 Ekiti youths in critical technology skills required in order to be globally competitive and introducing coding camps and classes in primary and secondary schools across the state.

Another way that the APC Deputy Governorship candidate said the Mr Oyebanji promised to empower youths for economic emancipation of Ekiti state is through enhancement of the State Polytechnic to produce talents in agribusiness.

Breaking down BAO’s manifesto to specifics, Mrs Afuye said that ensuring “broadband connectivity within 5Km of every location in Ekiti state”, as stated in the manifesto was realisable, just as finalising “Special Economic Zone status for Ekiti’s Knowledge Zone deepening its attractiveness to investors” was also realisable as the present government has laid the foundation with the building of the Knowledge Zone headquarters on Ijan road in Ado-Ekiti.

Another way that the APC Deputy Governorship candidate said the Mr Oyebanji promised to empower youths for economic emancipation of Ekiti state is through enhancement of the State Polytechnic to produce talents in agribusiness.

Mrs Afuye who noted that electricity was germane to the development of the state through digital and technological development said that aspect was well captured in the manifesto of the APC governorship candidate as BAO has promised to deepen existing Independent Power Projects initiated by the current administration at EKZ and the SAPZ as well as other industrial hubs.

” On the national level, BAO said his government would “collaborate with the Federal Government to complete the Ilupeju and Ijesa-Isu substations and 132/33KV transmission lines to increase electricity supply to Ekiti State”.

On tourism, Mrs Afuye said opportunities would be created for further development of the state through the designation of the Ikogosi-Ipole Iloro axis as a special tourism zone as BAO stated in his manifesto.

Mr Oyebanji also promised to boost tourism business in the state through other measures, such as providing security, infrastructure, power, broadband within the zone, where Public Private Partnerships would be encouraged to build a film village and other cultural attractions.

The Deputy Governorship candidate noted that part of the practical steps highlighted by Oyebanji to transform Ekiti state was to inculcate the airport under construction into the tourism building agenda of his government by operating the airport with the inclusion of a specific tourism section to drive domestic and international tourist activity.

Another measure of transforming the economy is to concession existing tourism assets of the state, such as Ikogosi Warm Springs and Resort, Arinta Waterfalls and Ero Dam and others.

Mrs Afuye said these practical steps would not only provide employments for the teeming masses of Ekiti youths but also provide them with the opportunities of contributing maximally to economic growth of the state.

She said the major problem of Ekiti state at the present moment is poor economy, which BAO’s manifesto is aiming to address, as she said there would not be magical transformation of the economy without preparing the youths with the enabling environment that would make them to become more productive.

She called on Ekiti people to dispassionately look at BAO’s manifesto with a view to seeing the benefits it holds for the people in building a virile economy that can transform the state to a prosperous entity that future generations would build upon.

She noted that the formula for economic rebirth of a people of particular places in the world has always been visionary agenda drawn up by selfless leaders whose visions have always been economic turnaround for their people.

Mrs Afuye said Ekiti people should be determined to cooperate with a visionary leader with many years of experience in governance such as Oyebanji to bail Ekiti state out of the economic hardship facing the state.

She however called on Ekiti people to embrace the developmental vows of Mr Oyebanji in the quest for a better Ekiti state.